My obsession with my eyebrows began in 7th Grade. I was riding on the school bus back, and the girl in the seat in front of me was telling us how her mother tweezed her eyebrows for her. She rambled on for the duration of the ride telling us every single detail of her tweezing experience. She told us how her eyebrows now framed her eyes better and that she looked for feminine. I knew immediately that this was something that I needed to get in on. 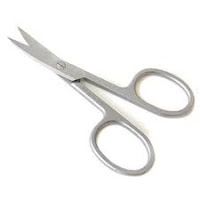 I knew my own Mother had tweezers in her make-up bag, so after dinner I snuck into bathroom and took them. I also took a little mirror and headed into my bedroom to clean up my brows a little. The first problem was that I couldn't figure out how to use the tweezers. I knew what hairs that I wanted to grab, but the tweezers just couldn't seem to get them off of my face. I knew not to let this obstacle get in my way, so I casually went back to the bathroom and grabbed a pair of nail scissors. I am still not entirely sure how I managed to do this, but I twisted the scissors in a way that I was able to grab the hairs without cutting them off at the root. There were a few casualties along the way, but after a good hour, I managed to successfully "tweeze" off most of my natural eyebrows.

Satisfied with the job, I put everything away and joined my Mother in her bedroom while she watched t.v. It took her about 5 seconds to realize what I had done. I will never forget her gasping and asking me, "Ohh no, what have you done?!" I'll admit now that I zealously over-tweezed and gave myself what one would consider a Pamela Anderson brow. I can't even imagine what my friends at school thought, but maybe they were jealous as well and went home and over-tweezed their eyebrows too?

Really, I had absolutely no idea what I was doing. I didn't do any research, I didn't know where an eyebrow should start or end, or what shape would look best on my face. I just went for it and took one for the team. Bad idea! I could have really used a guide like this.

I stuck with the scissor technique for sometime, until my Mom caught on and bought me some tweezers of my own. They were just the standard Revlon pharmacy brand, but they did the trick. The annoying thing about my eyebrows is that the hairs are dark brown and are very thick. An individual hair can support the entire width of the brow in places and its removal could leave a gaping hole, or shortened the overall length.

It also means that the hairs growing in are dark and obvious. I became obsessed with monitoring the re-growth of my hair and would often tweeze several times a day. There is nothing more frustrating than seeing a hair, and not being able to remove it. I would wait a few hours and hope that it grew enough so that I would be able to remove it later in the day. Seriously, obsessed.

For the next couple of years my eyebrows remained painfully thin. I remember being on vacation in P.E.I. and my Dad telling me that I should grow them out a little more. When did my Dad ever comment on my eyebrow width? I'll admit now that he was 100% right, but I just wasn't ready to make the change at the time. Think of it as someone telling you that you and your boyfriend are not meant to be together. Eventually you will figure it out for yourself, but in the mean time you just want everyone else to mind their own business.

My eyebrows and I had a very personal relationship.

Email ThisBlogThis!Share to TwitterShare to FacebookShare to Pinterest
Labels: Beauty and Make-Up