My high school daily routine consisted of waking up, and before my shower I would sit on the counter and tweeze my eyebrows looking into the medicine cabinet mirror. I would also leave the little hairs I removed on the frame of the mirror which totally disgusted my three brothers. I am not proud of this now. After school, and definitely before bed, I would hop back on to the counter to see what was going on and if I could tweeze anything else. Tweezing became totally engraved in to my way of life.

At the end of high school, I bought a dark brown powder to use to fill in my eyebrows a little more (or when a supporting hair had accidentally been removed). The powder came with a stiff brush and a pair of mini-tweezers. These little tweezers were awesome! I was able to tweeze out hairs I'd never dreamed of tweezing before. The only problem was that they were so small, that I was often misplacing them and had difficulty finding them even in my own make-up bag. They did the trick though, and I never left town without them. 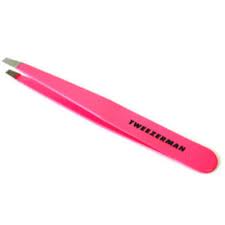 Years passed, and while reading a trashy magazine, I saw an ad for Tweezerman professional tweezers. I didn'teven know there was such a thing as professional. The next time I was in Shoppers Drug Mart, I took a look and sure enough they sold them. They run about $25/pair, but knowing how much time and energy I spent on tweezing I figured that it was a good investment. Tweezerman sells many different style of tweezers, but I settled on the standard slanted tip pair in bright pink. I got home and went to try them right away.

These are the Cadillac of tweezers. There wasn't a hair, no matter how short, that I couldn't remove with these guys. They were sharp, and strong and had a tight grip that no one could escape from. I was in tweezing heaven.

My mother knows how much I love tweezing, and during one of her shopping adventures she found a tweezer carrying case, with the most powerful magnifying mirror I had ever seen. I had had magnified mirrors in the past, but this one trumped all of them, plus it keep my tweezers in a safe, easy to find case. I truely believe that I now have the best tweezer system in the world. 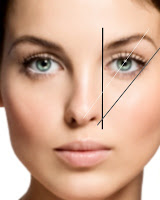 A couple of weeks ago, I noticed that my darling Tweezermans just weren't doing the trick. I'm not sure then it started, but I wasn't even able to pull out some of the longer, easy to reach hairs. They would just slip through the cracks! I bit the bullets, and went to buy a second pair of Tweezermans. I settled on a bright red pair, brought them home, and again was amazed by their ability to tackle even the shortest hairs. I was disappointed that I had to buy a new expensive pair after only a couple of years though.

That's when I saw it. On the new packaging, it advertised that Tweezermans were good for life, and they offered free sharpening! All I had to do what go to their webpage, fill out a form, print it off and send them my used tweezers. I received an email when my tweezers arrived at their warehouse, and a second email when they were being shipped back to my loving arms. Who knew? Now I have not only one, but two pairs of these amazing tools.

I haven't decided exactly where to keep my extra pair, but f you ever get a sliver, I think you know who to see.
Posted by Unknown at 7:00 AM

Email ThisBlogThis!Share to TwitterShare to FacebookShare to Pinterest
Labels: Beauty and Make-Up